The Body by Stephen King 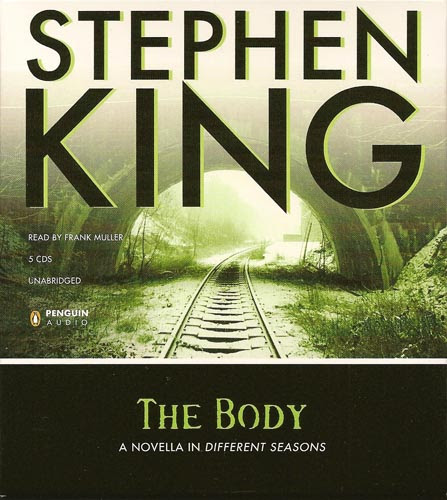 'Loony,' Milo said smugly. He'd found the button, all right. 'Loony's kid, loony's kid, your father's got toys in the attic, kid, tough break.'
Vern and Chris had been getting over their laughing fit, perhaps getting ready to appreciate the seriousness of the situation and call Teddy off, but when Teddy told Milo that his mother blew dead rats, they went back into hysterics again, lying there on the bank, rolling from side to side, their feet kicking, holding their bellies. 'No more,' Chris said weakly. 'No more, please, no more, I swear to God I'm gonna bust!'
Chopper was walking around in a large, dazed figure-eight behind Milo. He looked like the losing fighter about ten seconds after the ref has ended the match and awarded the winner a TKO. Meanwhile, Teddy and Milo continued their discussion of Teddy's father, standing nose to nose, with the wire fence Milo was too old and too fat to climb between them.
'Don't you say nothing else about my dad! My dad stormed the beaches at Normandy, you fucking wet end!'
'Yeah, well, where is he now, you ugly little four-eyed turd? He's up to Togus, ain't he? He's up to Togus because HE WENT FUCKING SECTION EIGHT!'
'Okay, that's it,' Teddy said. 'That's it, that's the end, I'm gonna kill you.' He threw himself at the fence and started up.
'You come on and try it, you slimy little bastard.' Milo stood back, grinning and waiting.
'No!' I shouted. I got to my feet, grabbed Teddy by the loose seat of his jeans, and pulled him off the fence. We both staggered back and fell over, him on top. He squashed my balls pretty good and I groaned. Nothing hurts like having your balls squashed, you know it? But I kept my arms locked around Teddy's middle.
'Lemme up!' Teddy sobbed, writhing in my arms. 'Lemme up, Gordie! Nobody ranks out my old man. LEMME UP GODDAMMIT LEMME UP!'
'That's just what he wants!' I shouted in his ear. 'He wants to get you over there and beat the piss out of you and then take you to the cops!'
'Huh?' Teddy craned around to look at me, his face dazed.
'Never mind your smart mouth, kid,' Milo said, advancing to the fence again with his hands curled into ham-sized fists. 'Let 'im fight his own battles.'
'Sure,' I said. 'You only outweigh him by five hundred pounds.'
'I know you, too,' Milo said ominously. 'Your name's Lachance.' He pointed to where Vern and Chris were finally picking themselves up, still breathing fast from laughing so hard. 'And those guys are Chris Chambers and one of those stupid Tessio kids. All your fathers are going to get calls from me, except for the loony up to Togus. You'll go to the 'formatory, every one of you. Juvenile delinquents!'
He stood flat on his feet, big freckled hands held out like a guy who wanted to play One Potato Two Potato, breathing hard, eyes narrow, waiting for us to cry or say we were sorry or maybe give him Teddy so he could feed Teddy to Chopper. Chris made an O out of his thumb and index finger and spat neatly through it. Vern hummed and looked to the sky.
Teddy said, 'Come on, Gordie. Let's get away from this asshole before I puke.'
'Oh, you're gonna get it, you foulmouthed little whoremaster. Wait'll I get you to the constable.'
'We heard what you said about his father,' I told him. 'We're all witnesses. And you sicced that dog on me. That's against the law.'
Milo looked a trifle uneasy. 'You was trespassin'.'
'The hell I was. The dump's public property.'
'You climbed the fence.'
'Sure I did, after you sicced your dog on me,' I said, hoping that Milo wouldn't recall that I'd also climbed the gate to get in.' What'd you think I was gonna do? Stand there and et 'im rip me to pieces? Come on, you guys. Let's go. It stinks around here.'
"Formatory,' Milo promised hoarsely, his voice shaking. 'Formatory for you wiseguys.'
'Can't wait to tell the cops how you called a war vet a fuckin' loony,' Chris called back over his shoulder as we moved away. 'What did you do in the war, Mr Pressman?'
'NONE OF YOUR DAMN BUSINESSr Milo shrieked. 'YOU HURT MY